Won an Oscar but Lost a Man 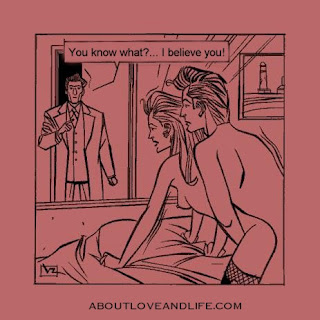 There's an interesting fact I read on the Daily Mail today...! "Kate Winslet, Reese Witherspoon, Hilary Swank, Chalize Theron, Julia Roberts and Halle Berry all found themselves newly single shortly after winning an Academy Award." Sandra Bullock is the latest newly added member of this 'exclusive' team as she just found out... that her honey-bunny Jesse James was cheating on her while she was away shooting a film in Atlanta.

The article goes as far as to call this 'rare' phenomenon the "Oscars Curse" (ta-ta-ta-DAH!) but I prefer to call it... human nature. Men and women cheat on their partners for all kinds of different reasons. No matter how pretty, famous and adorable you might think you are...

Look into the Princess Diana case.... The whole planet is wondering how has Charles chosen Camilla over Diana, but he's not... and neither is Camilla. Remember the chick that Hugh Grant has chosen for himself when he got tired of... Liz Harley?! Tiger Woods, John Terry, and so many more are only human beings and we tend to forget this purely because they are on the spotlight.

Of course I can understand the humiliation they are feeling since actors are normally very sensitive people who are overexposed to the media and therefore to people's judgement and it's hard - so bloody hard - not to give a damn about what other people think when your primary aim in life is for everybody to adore you and recognise how special you are. They are most vulnerable because of their exposure - agreed.

But even this is rapidly changing. Social networking sites are turning us all into small celebrities. Even if you just have a few hundreds eyes fixed upon you, you still might feel you are famous and therefore important. This is a very common phenomenon in smaller cities too, where people think so high of themselves and carry themselves around like some sort of royalty just because they know a handful of other people that live in the same god-forgotten place.

Whatever goes out on Facebook, Twitter, or any other social networking site stays there forever! We ourselves are becoming small celebrities with people regularly following our news, commenting on our photos, and we are always trying to impress them all. "Look at me, look at me! Do you want to become my neighbour in Farmville?!" hahahaha - it's so funny really (though tinged with a pinch of sadness) how people in our days take much more time to care about their online profiles rather than themselves.

Well the truth has always been hard and ugly but it's out there for anyone that dares to face it. We are either all special all none of us. And cheating is a global phenomenon as old as time and light. So why are we (I refer to the human race as a whole) still taking it all so seriously in the first place? Wouldn't it be better if we all put our hands on our hearts and admitted that we might all fancy some variety in our sex life from time to time?

I am not trying to underestimate anyone's feelings. All I am saying is that since 90% of the world's population (I just made up this statistic just like everybody else does! :P) is bound to experience a heartbreak, we would be much better off, psychologically speaking, if we avoided any unnecessary repetition of the painful and distressing memories and (alas!) changed the way we think and feel about the infidelity in general. Let's be honest with ourselves first and then the lies, we sometimes base our whole lives upon, will soon fade away....

Any other thoughts?
Posted by The What Girl at 12:39 No comments: